Exciting news: I have conquered pie and live to tell the tale.

It wasn’t all the bad, actually.

Admittedly, I have always shied away from pies and laminated doughs. They’re at the very top of the pyramid of my personal #bakinggoals. Laminated dough at the top. Then pie. Then entremets which I am dying to make but am also deathly afraid of.

The pie-spiration comes from none other than Four & Twenty Blackbirds Pie Book, which is the first official non-second-hand-actual-hardcover-cookbook that I have bought. I’ve refrained from buying cookbooks for the longest time, telling myself that I wouldn’t actually cook everything inside, or that there’s a wealth of cookbooks in the library, or that there’s so many gorgeous blogs in the blogosphere nowadays. Which may be true, but to turn through the crisp pages and to be able to make notes in it and call it yours forever and ever—– it may be worth it.

And this book is a true beauty. Beautiful pictures, great crust-making tips (with large pictures showing the texture you should be looking for), an introduction about their beginnings, family business and the start of their pie shop, and a detailed yet comprehensive discussion about ingredients, sourcing them, and tools. I also really appreciated how their belief in using local, seasonal ingredients is inherent in how they decided to structure their book. 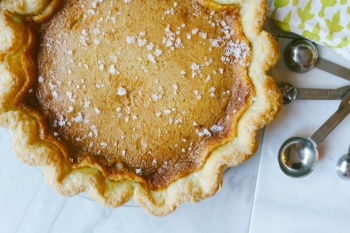 I usually tend to tinker with recipes, but this one I followed it to the T (with the exception of reducing the sugar by 1/4 cup, which was the right decision), because I regrettably am not able to visit their pie shop in Brooklyn… so I wanted to make it and eat a slice and pretend I’ve traveled 152385.7362 miles to their shop.

I also wonder how close it would be to their pie… you would figure that bakeries would keep their own recipes secret, but I think technique is above all the most important “ingredient”, and it’s the reason why there’s no reason to fear going out of business or anything. To be able to replicate their pie crust– it’s all in the technique. Pie has always been scary to me– it’s technical and mysterious in the way that many swear by a specific fat or using a combination of fats, or they have secrets and add things like vodka or an egg yolk or vinegar. It’s so scientific you could probably do a whole science fair project on it. In the past, my downfall is adding too much water, so that the resulting crust is neither tender nor flaky.

I’m not going to pretend that I am a pie expert, but I will summarize some tips I’ve picked up from the Blackbirds cookbook, Michelle over at Hummingbird High (eternally grateful for her super awesome detailed, specific tips) and King Arthur Flour’s awesome article.

I like that this method divides the work up over two (or more) days, which makes it feel like it’s a lot less work, and everything really comes together in a snap.

And a note about custard pies from the pie book– it’s important to take them out of the oven at the right time, because if you take it out too early, it’ll be underbaked and runny, and if you leave it in too long, it’ll be overcooked and curdled. As it’s finishing, you’ll notice the outer 2 inches of the custard will look set, puffed up slightly, and when you shake the pan, only the centre will jiggle a bit and be barely set, but will be moving as one. It’ll still continue to cook in the pan once you remove it. I noticed a small crack in the custard on my pie and I panicked, thinking about the horrors of curdled pie, so I removed the pie. It’s not as golden brown as you see in some other pictures of the Salty Honey, but I actually preferred it this way, because the custard was on the softer and more fluid side, reminiscent of an egg tart.

(Note about the photos: they were shot at two different times of the day– early morning and at dusk, which is why the pie seems to be two different colours. And in regards to my last post in which I (jokingly) wrote an ad for hiring a hand model, my friend offered the brilliant suggestion of using a tripod, which has literally never crossed my mind. I google image’d “DIY tripod” and it looked pretty … not so easily DIY’ed … so before then, I will settle for the ancient photographic technique of the “selfie” to add in the human factor to these photos. uhmmm, no.)

The verdict for this pie?

With the first bite, I understood the hype… so this is what people are talking about.

The pie crust actually turned out pretty well, except it was still soggy at the interface of crust-and-custard, but since it’s baked together with the custard (no prebaking), the only way I see going around that would be to sprinkle some graham crackers or something to act as a divider between the crust and custard filling. Who knows.

Salty Honey Pie. One bite and everything will be right in your world. 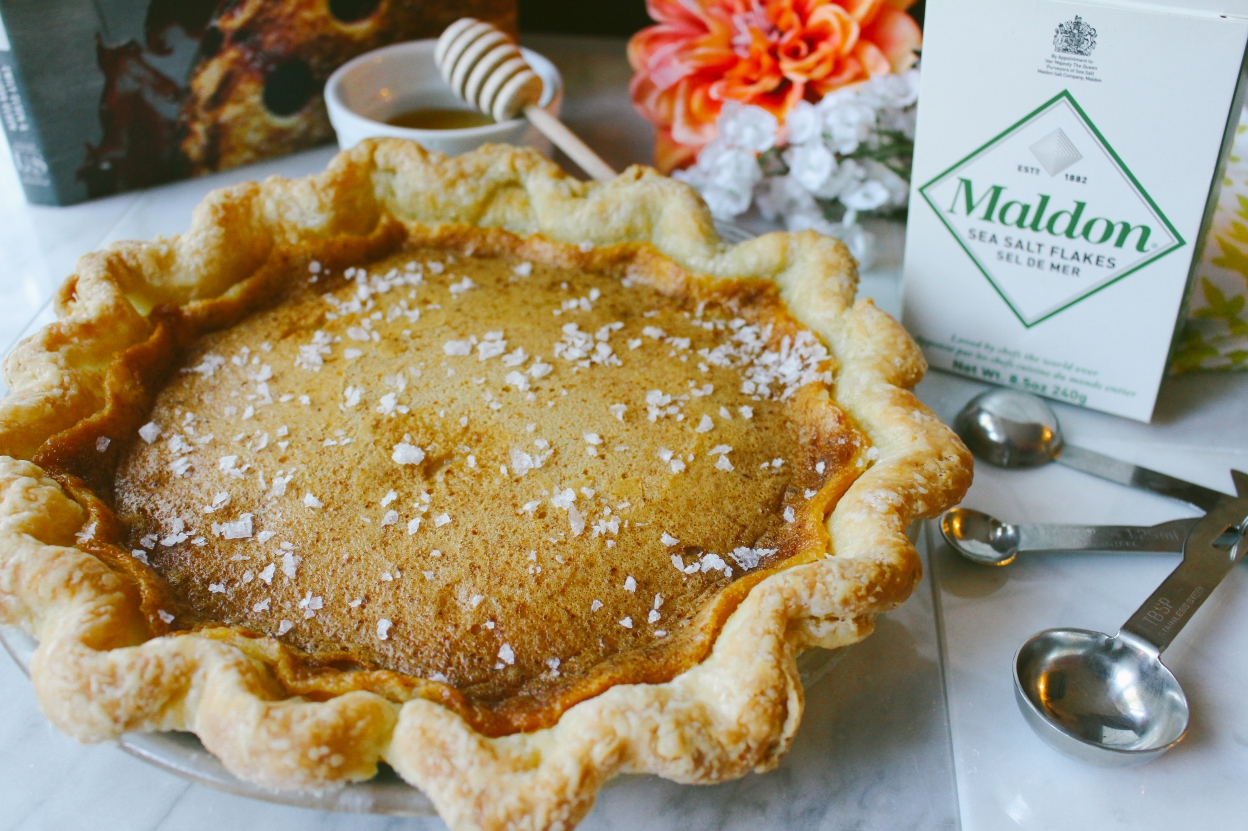 For the salty honey custard:

For the custard and entire pie: