We drove and drove and drove that night after leaving Ruby beach– I drove down highway 12 east, high-beam on and all– and found a motel at 2:00 am, and went to sleep at 3. The next morning, we arrived at Sweedeedee, and found it was already pretty bustling by 10am. 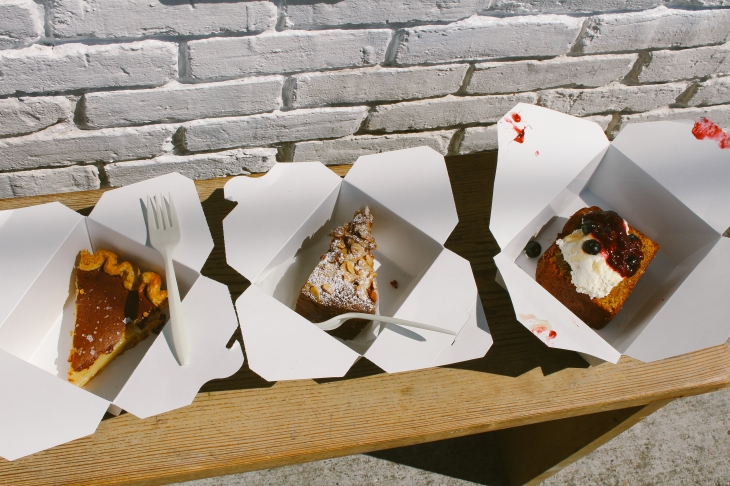 I ordered, from left to right, their salty honey pie, almond cake, and honey whiskey cake with whipped cream and fruit.

The salty honey pie tasted pretty similar to the one I made, except for a richer coloured and crisper crust. Their almond cake was fragrant, nutty, lightly sweet, albeit not that exciting– delivers exactly what it promises. The honey whiskey cake was also moist with a faint taste of whiskey, not overpoweringly so. 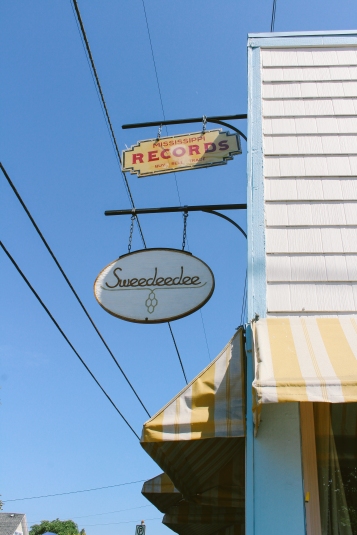 A homey, warm place. Cute without even trying, with a little hint of hipster.

Afterwards, we did what we do best– wander the streets. 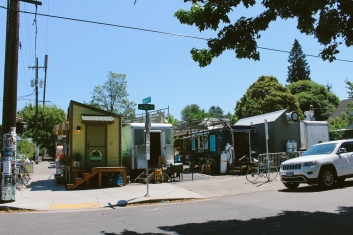 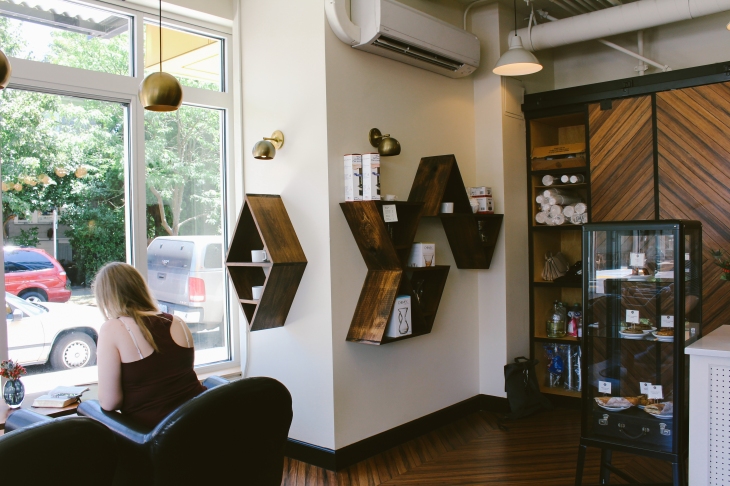 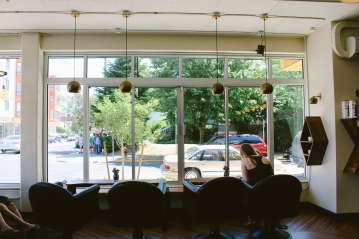 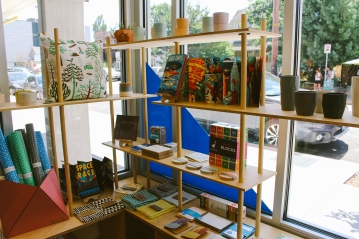 We made a point to stop by Pok Pok, of course. We’d been there once before, and it completely changed what Thai food meant to me, enough so that it’s easily one of my favourite cuisines. We wanted to try something new, besides their famous fish sauce wings. It’s red, it’s hot, and only I can be oblivious enough to the 30+ degree weather to order something like this. The prawns were cooked perfectly, not undercooked but not overly done either. The broth was sour and hot and sweet from the seafood.

The pork belly / pork shoulder was braised and was tender and flavorsome. The boar collar meat– it was my first time trying some– was not as tender, but rather interesting in texture.

I don’t know how else to describe this food. It’s rich and complex and familiar but not. 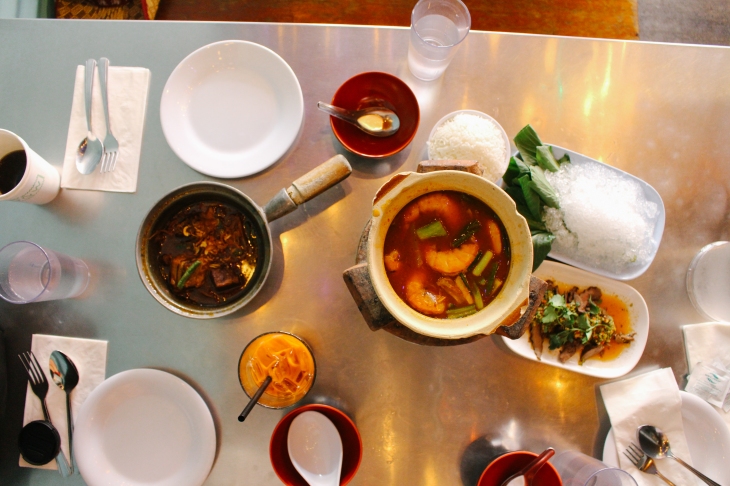 Anddd just before sunset, we went to Lardo, a food-truck-turned-sandwich-shop. I tried my best to ignore the words “bringing fatback” and “PIG OUT” which is on their wall, as I perused the menu.

I think they said it was their 3rd anniversary, and we got free cake! It was such a sweet gesture. One minute we’re paying for our food, and the next moment we look up and there’s these cake slices in our face. Their cake turned out to be huge– it was half cut up, but it looked like it used to be a blue truck.

Oh yeah, that would make sense. 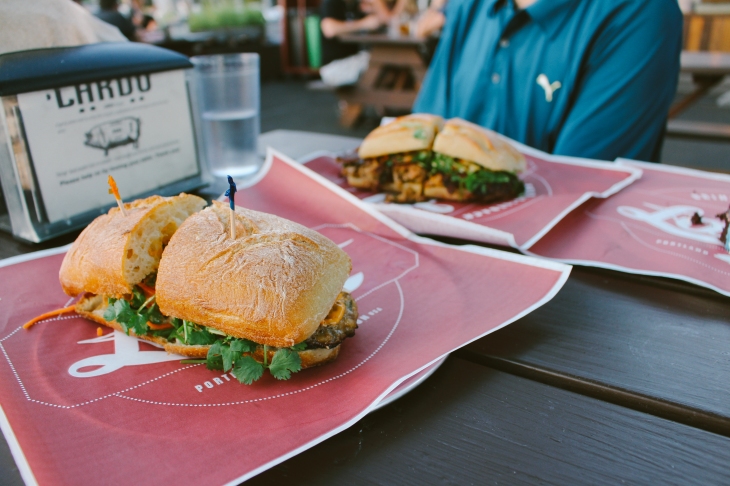 I settled on the Pork Meatball Banh Mi, with cilantro, pickled veg and sriracha mayo, and the Korean Pork Shoulder, with house kimchi, spicy mayo and cilantro.

I would’ve preferred a higher filling-to-bread ratio, but it was extremely well balanced in flavour, and tasted less unhealthy than it must be. I liked that their kimchi was in-house made, because it was milder and less in-your-face than traditional kimchi I’ve tried from Korean restaurants or the stuff in jars. Similarly, the pickled vegetables were a bit shyer in flavour compared to banh mis I’ve had before, but enough to do justice to its predecessor. 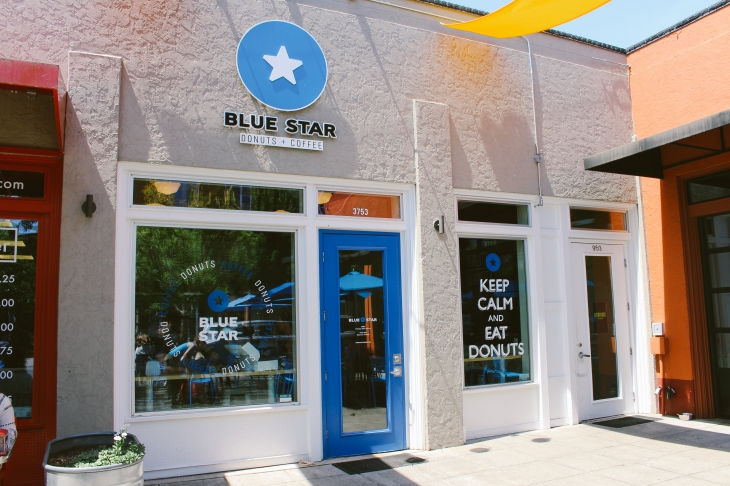 The next morning, we did a bit more wandering and a little bit of shopping, and stopped by Blue Star before heading back home. 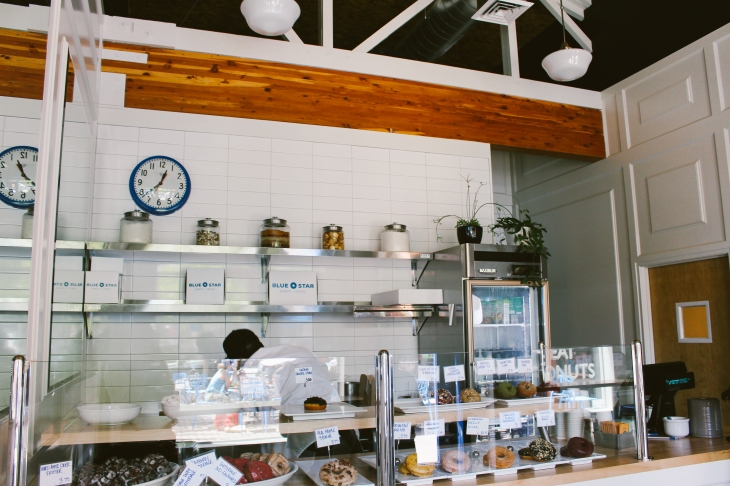 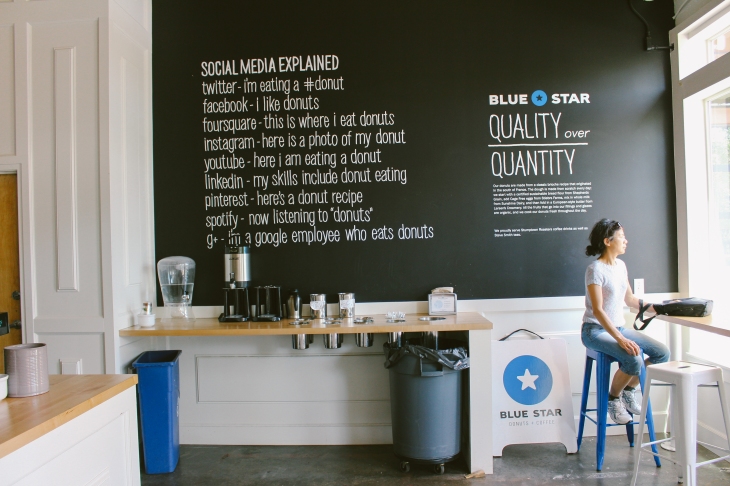 It took everything I had not to order one of everything… I settled for three: hard apple cider fritter, blueberry bourbon basil, and coffee coconut cheesecake. 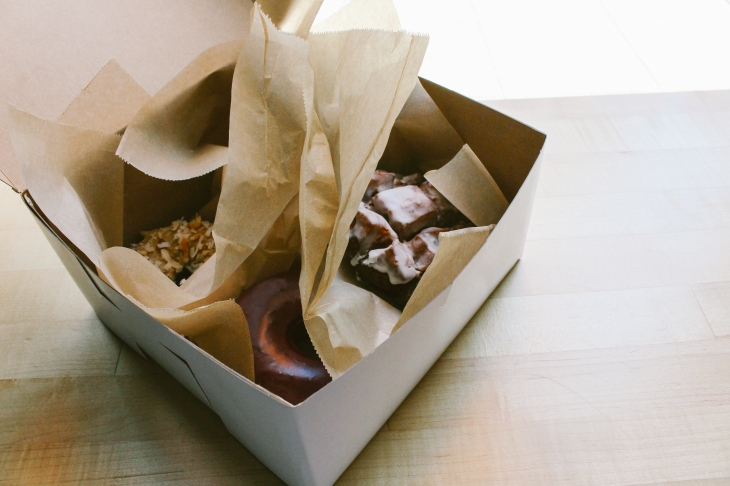 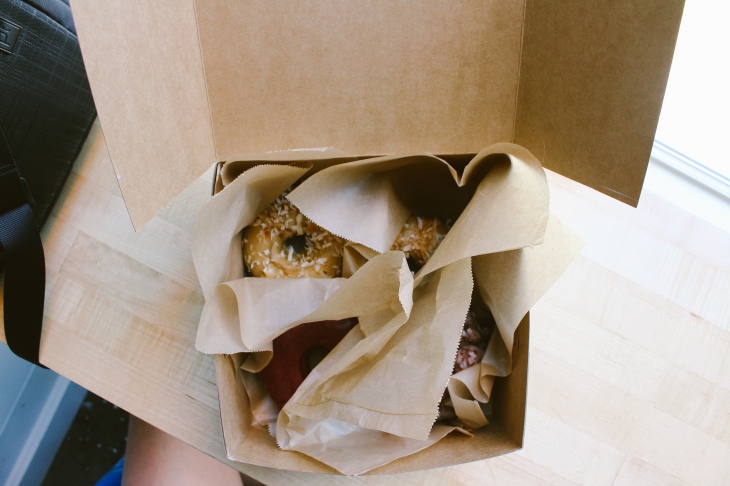 Upon opening the box, we found that the guy who helped us had thrown in an extra coffee coconut cheesecake donut… thank you, guy! You put the ‘star’ in blue star 🙂

The fritter was dense, heavily spiced, with chewy bits and crispy caramelized bits with pieces of apple… just perfect.

The blueberry bourbon basil donut was a yeast donut, with a vibrantly coloured glaze. I’ll admit that my palate is not that sensitive, and I didn’t immediately pick up on the bourbon and basil. I think I was distracted by how fluffy and perfectly fried they were– not drenched in oil, as some donuts can be.

The coffee coconut cheesecake was a cake donut, slightly denser than the yeast but very moist. It had a light airy coffee flavoured topping, with a cream cheese element, and coconut flakes. I noticed immediately how it was saltier than the other two donuts, and appreciated how it counteracted the sweetness. 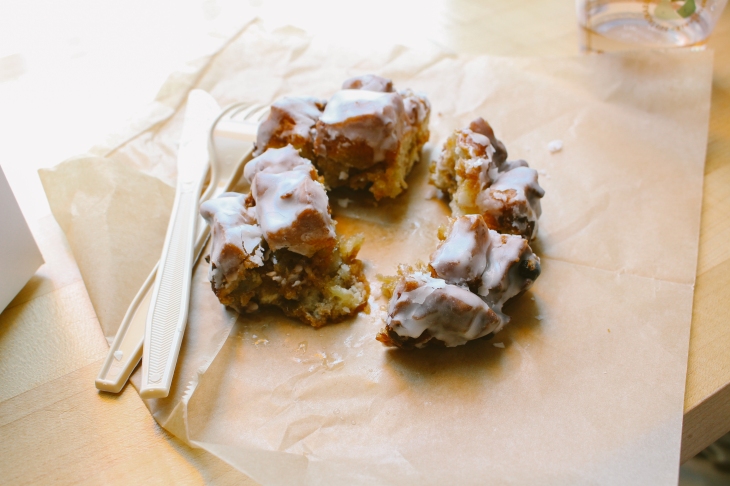 So, our day and a half in Portland finished off pretty sweetly. Until next time, PDX.