Kanelbullar has always been something I’ve admired from afar, primarily for its beautiful twist. Aren’t they like the more understated, simple-but-elegant version of its American cinnamon roll cousin? In this recipe, the primary spice is cardamom instead of cinnamon, and it perfumes the dough subtly. It’s glazed twice, once before and once after baking, with a sticky runny spiced-glaze.

Be warned though, these are definitely not like cinnamon rolls in its ooey-gooey sweet goodness. I’d like to imagine these are a lot more breakfast friendly; they’re made with whole wheat flour and a modest amount of butter, they lack frosting, and are less sweet, and so overall it’s no longer a dessert masquerading as breakfast. I like that its primary focus is the spices– there’s no cream cheese frosting or icing that masks the true taste of cardamom or cinnamon, and you just get a very earthy, fragrant experience. Paired with a cuppa chai, and it’s like a warm hug from the inside.

My brother and sister-in-law often come home late at night to the smells of my baking (my favourite time to bake, for some reason, happens to be at night), and it’s cute when they get excited and ask what I’m making. In this particular instance, I tell him cardamom buns, and he jokingly accuses me of making him fat. I try 😉

These were out of the oven around midnight, and I couldn’t resist but take a bite as they were fresh and warm out of the oven (isn’t that the most gratifying part of baking at home, after all?). I was surprised by how light, fluffy and tender they were, with the slightest satisfying chew. Not dense at all, like how some of your cinnamon buns can get. I gave Michael the centre (aka the best part of any cinnamon bun), and he said they tasted healthy, which, you know, I was happy to hear. And they do– it’s not buttery and has a great texture from the whole wheat flour and grains.

They’re usually topped with pearl sugar, which I didn’t have, so I used black sesame seeds instead– flaked almonds would also be lovely. As a last-minute idea, I also shredded an apple, squeezed out its excess juices, and scattered the apple on the dough, before rolling them. This helped keep the bun moist, but since the apple was shredded, you don’t really get a big bite of apple, so it’s more complementary to the spices than the big star. I might try upping the apple content next time, just to see how it turns out.

Give ’em a try, for an extra special weekday treat 🙂 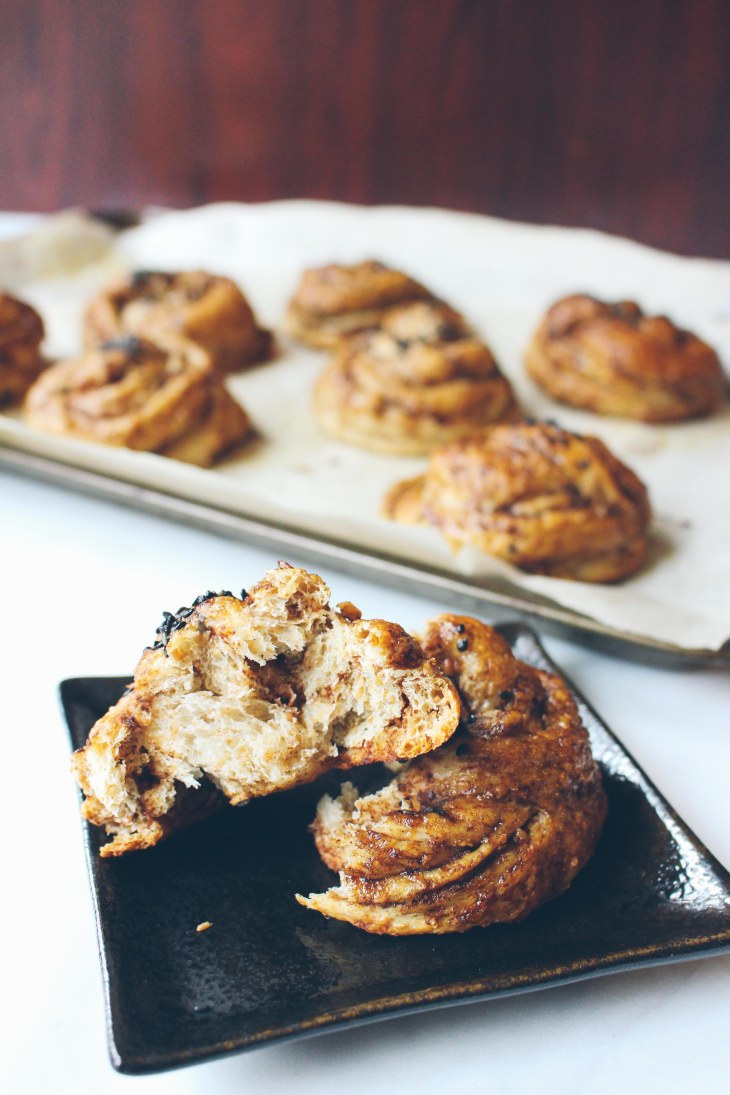