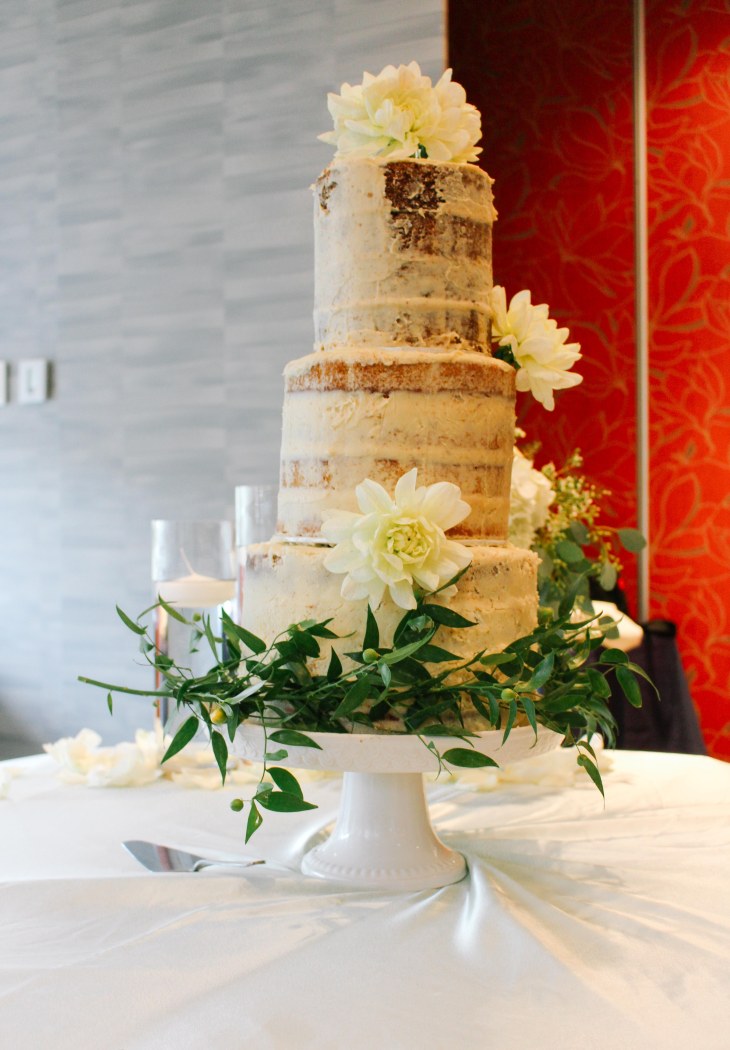 A bit over a week ago, my brother and my sister in law held their wedding reception at Kirin *throws confetti*. Even though they were officially wed already and so this lil Chinese wedding banquet was relatively casual, it was still nice to see everyone all dressed up and looking sharp, celebrating the start of something beautiful.

It went unsaid that I would be making their wedding cake– I’d be offended if they bought it– but at the same time, inside I was terrified that I wouldn’t be able to put out a respectable cake. I started looking at ideas on Pinterest ages ago, but it wasn’t until literally a week before the reception when I actually sat down and started looking at recipes, calculating the quantities, watching videos on how to dowel cakes and generally freaking the * out. Especially when you see less-than-perfect (read: lopsided and hard to look at) homemade wedding cakes out there. Ouch.

I wasn’t all too confident in my cake skills. Up until this point, I hadn’t ever made a tall, even layered frosted cake. There was hardly the occasion to. But I found Sweetapolita’s blog invaluable, as Rosie is truly the cake master.

So breaking down the steps and process, I decided to make a 6″, 8″, 10″ three-tiered cake, with four 1.5″ layers for each tier. This equates in 80 dessert-sized portions. The 10″ tier was going to be a white chocolate cake, with lemon meringue buttercream filling, served with fresh berries on the side. The middle tier was a fluffy cinnamon cake, with maple cream cheese, and apple compote on the side. The top tier was a banana cake, with peanut butter frosting (later changed to maple cream cheese, due to allergy concerns). The entire thing would be frosted “naked” styled, with vanilla French meringue buttercream.

I decided to break down the process over a week, so it’d be more do-able with school. I made a few components each day, wrapped them tightly, sealed them in ziplock bags, and froze them.The day of the wedding reception, I had 6 hours to turn my components into, well, a cake.

Everything had gone smoothly up until now, so of course, something had to go wrong, it’s the law of the universe.

My batches of vanilla French meringue buttercreams weren’t playing nice, and they turned into this weird curdled mess when I tried to beat them to life out of the freezer. I knew they were fussy, knew I couldn’t give up that easily, knew there had to be a remedy. The remedy was supposedly taking out a 1/3 of the frosting, nuking it in the microwave, then slowly incorporating it back into the larger batch with the mixer running.

It didn’t work (and I tried twice). Luckily my second batch, that I didn’t try to rewhip, was usable, if not a bit hard and ice-cream like. I turned my attention to filling and frosting the 10″ layer, but also started making a fresh batch of French meringue buttercream… which also ended up failing. Frustrating, because my previous 2 batches turned out great.

I ended up using all my maple cream cheese frosting (that is so much easier to work with, it was dreamy), and as little as the French meringue buttercream as possible.

I bought the florals the day of the wedding to keep them as fresh as possible, and I’m so glad it actually matched the bride’s bouquet! I don’t know the name of the white flower (helpful, I know), but the greenery is Italian ruscus. I wired and wrapped the flowers in what must’ve been the most terrifying car ride ever– we were slightly late to the reception, and we almost lost the cake a couple times. 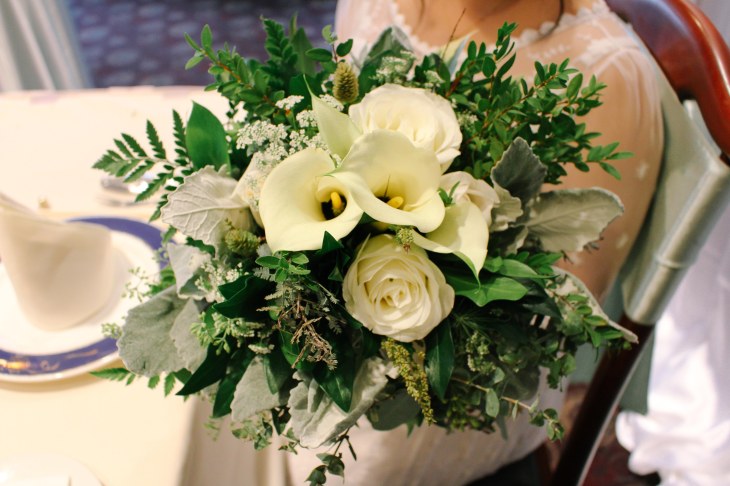 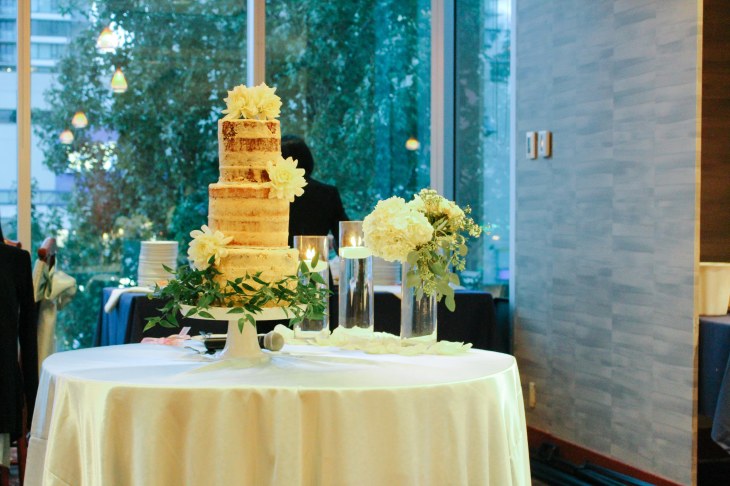 I assembled the cake on-site. I stuck the floral-tape wrapped wired flowers into flower picks, then into the cake. The Italian ruscus, it couldn’t be helped, touched the sides of the cake, and was held together with floral wire. I meant to touch it up in terms of smoothing out the frosting that got a lil roughed up from the car ride and hiding the edge of the cake boards with piping. But as the guests came in, I realized my time was up, and that from afar, you would hardly notice these small details anyway.

The wedding favours were cookies in a mason jar, made by the groom and bride themselves. Cute, right? I think the flavours were dark chocolate chip, white chocolate and cashew, and Rolo pretzel.

Each guest was served the white chocolate cake layer and cinnamon cake layer, with berries and apple compote (the top tier never got cut, as there was already too much!). The restaurant actually did such a good job portioning and presenting the cake. I was so proud when it came out, thinking is this what new chefs feel when their food gets served for the first time?!

The night ended happily with everyone’s tummies full from Chinese delicacies and slightly buzzed from the wine. The cake also got a few compliments too, and I myself was quite surprised that beast of a thing came out of my kitchen, from my two hands.

Congrats, Michael and Elaina. May your life together be even sweeter than this cake! 🙂