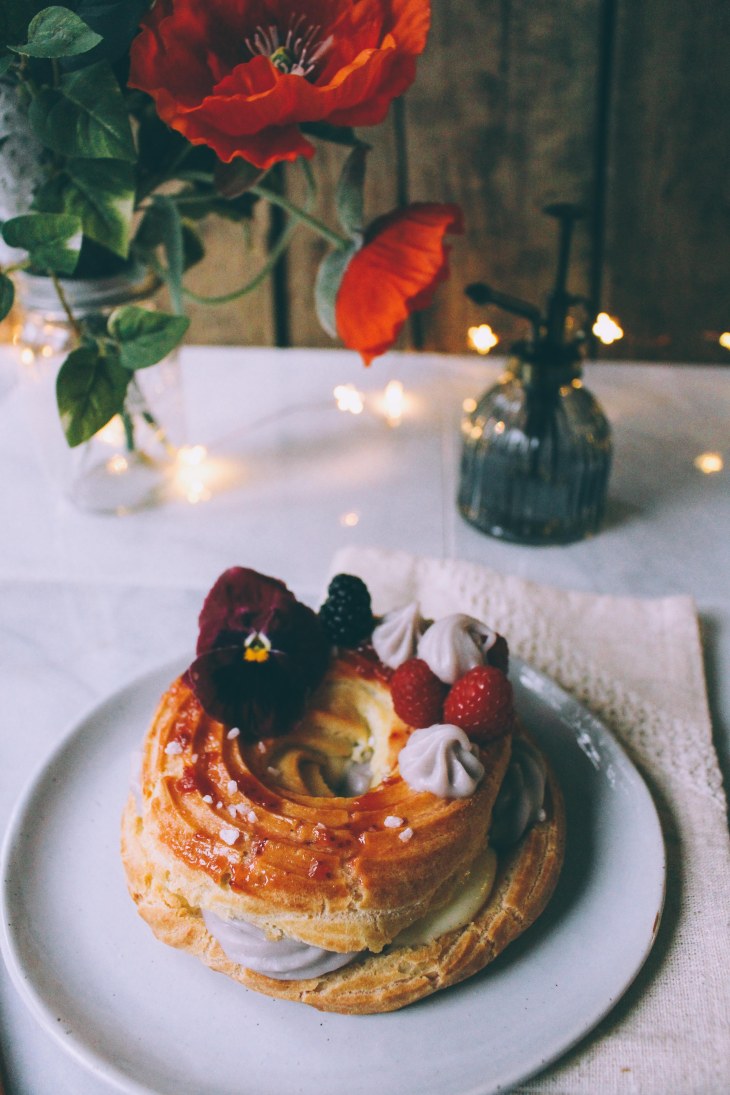 Tada, it’s a Paris-Brest (“a Paris what?”), just in time for the magical February 29th! A Paris-Brest is traditionally made with choux pastry and praline cream, and was created to honour the Paris-Brest-Paris bike race… it’s circular to represent the bike wheel.

I think it gives you a bit more freedom in terms of how you want to present it compared to regular cream puffs, just because its shape inherently gives you more surface area to work with. Conceptually I was going for a chestnut-taro Paris-Brest, but I’d never tried using canned chestnut puree before and was disappointed to find that its texture was like, well, chestnut meat / cat food, haha. So I did a quick switcharoo to a vanilla bean pastry cream and homemade taro paste. 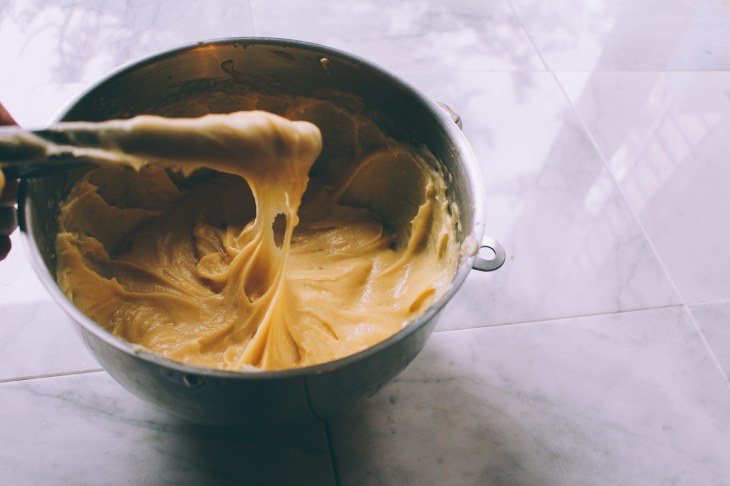 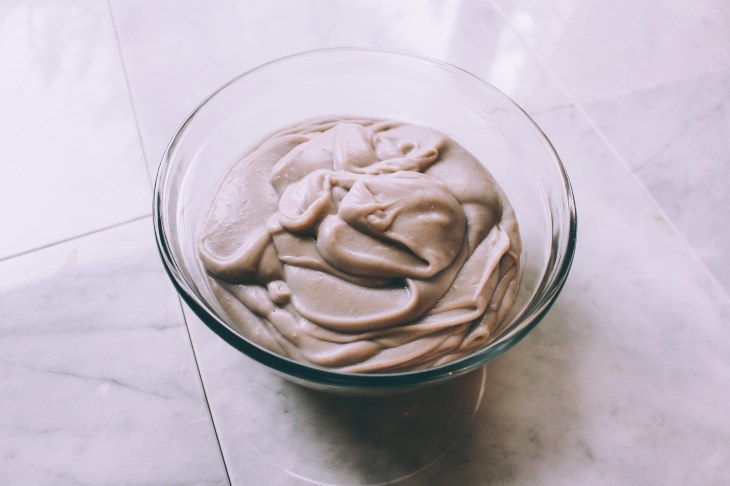 Oh yah, for those of you unfamiliar with taro, it’s a root vegetable and is quite starchy. It’s very versatile and used in many different ways in Chinese cuisine. You can eat it savoury by braising it with beef or pork, you can turn it into deep fried curry taro dumplings (a personal favourite) for dim sum or taro cake (often eaten during New Years). It’s also very common in dessert, and I bet you’ve seen it before on a bubble tea menus. It has a naturally sweet nutty flavour, reminiscent of a sweet potato except less sweet and more vanilla-y, so it lends itself quite well to dessert. Apparently in Hawaii, McDonalds offers taro pie…. mmm…?

The foundation of the pastry is a pate a choux, which you’ve seen before on this blog– the critical step is cooking the choux long enough on the stove to evaporate as much moisture as possible (but not over-doing it), and then adding enough eggs to the batter until a “bird’s beak” consistency is achieved… aka. it should hold its shape and turn down over itself, but not break off.

The taro paste is made simply out of taro (steamed) and blended with sugar to taste. Its texture actually turned out very thick, rich and buttery due to its starch. If taro isn’t your thing, of course you can just stick with just the vanilla bean pastry cream. The vanilla bean pastry cream is a little thin to hold up on its own when it’s presented in this way, so next time I might go with a mousseline cream instead.

As for piping, you can certainly use a stencil, or just freehand it (so that it’s more “rustic”). Pipe one circle, leaving an inner hole with a diameter of about 4 inches… you’ll notice that they expand quite a bit, so the “hole” will end up much smaller. Pipe another concentric circle inside of your first one. Lastly, pipe one more circle on top, so that the base is 2x thicker than the top. 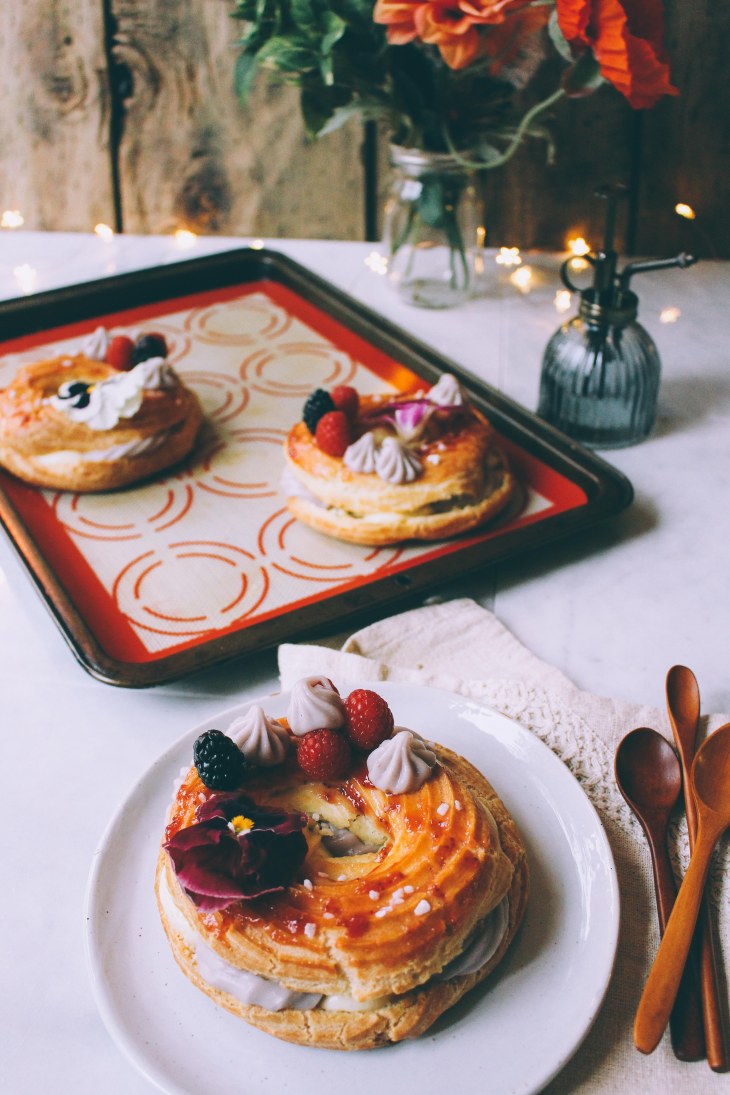 After baking, decorate to your heart’s content– I chose to glaze it with strawberry jam, stick some pearl sugar onto it, as well as berries and edible flowers.

This “recipe” is a lot more flexible and is really just showing how the same components of a cream puff can be transformed into its pastry cousin, that you can easily dress up. Dominique Ansel is doing a Snickers version of this with caramel, chocolate and peanuts, and is calling it a Paris-New York. Philippe Conticini does an incomparable one with praline cream. So really, this pastry can be a canvas for your heart’s desires as far as flavours go 🙂

So give it a go, make it your own, and I’d love to see how you transform the Paris-Brest! 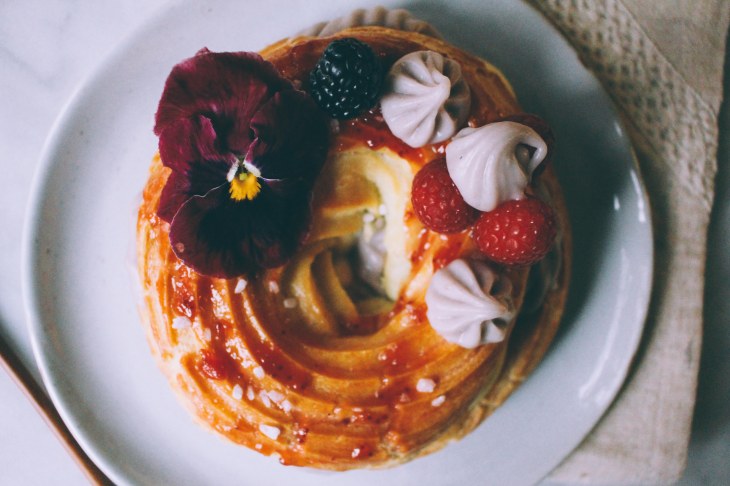 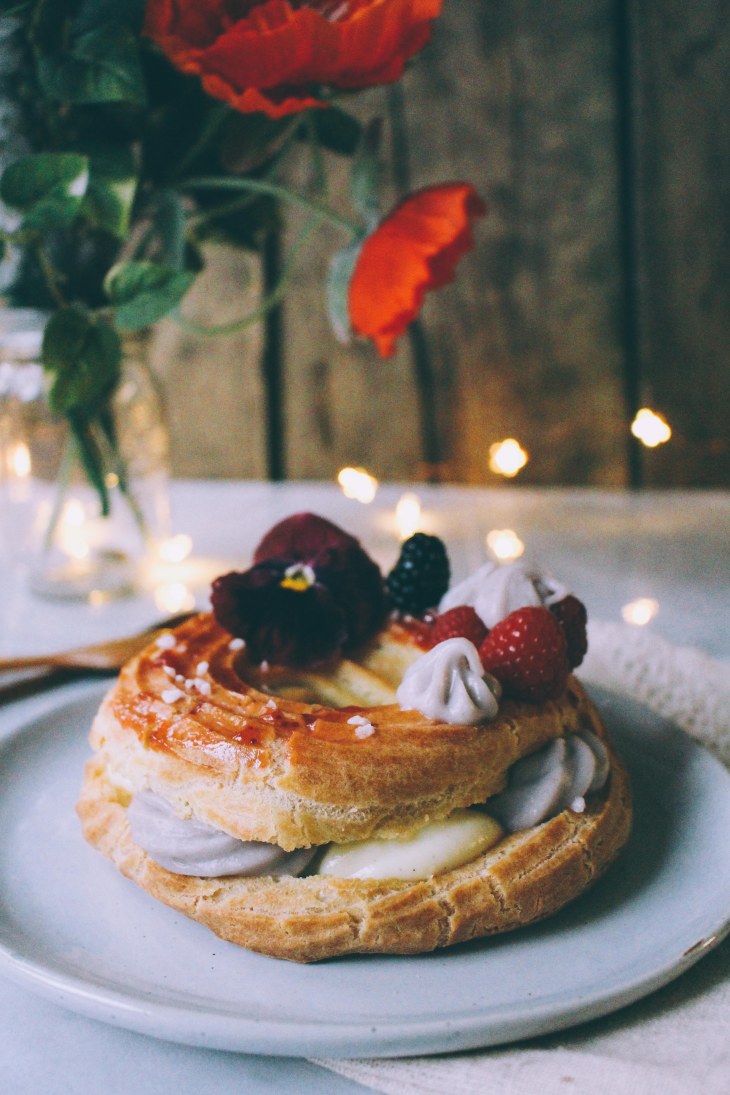 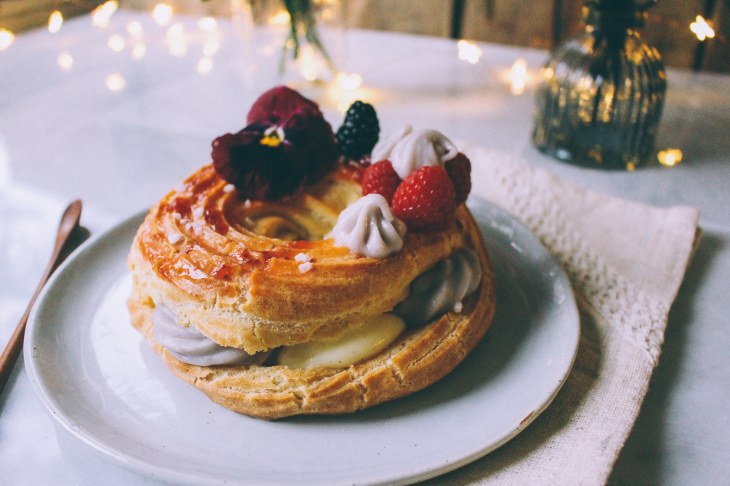