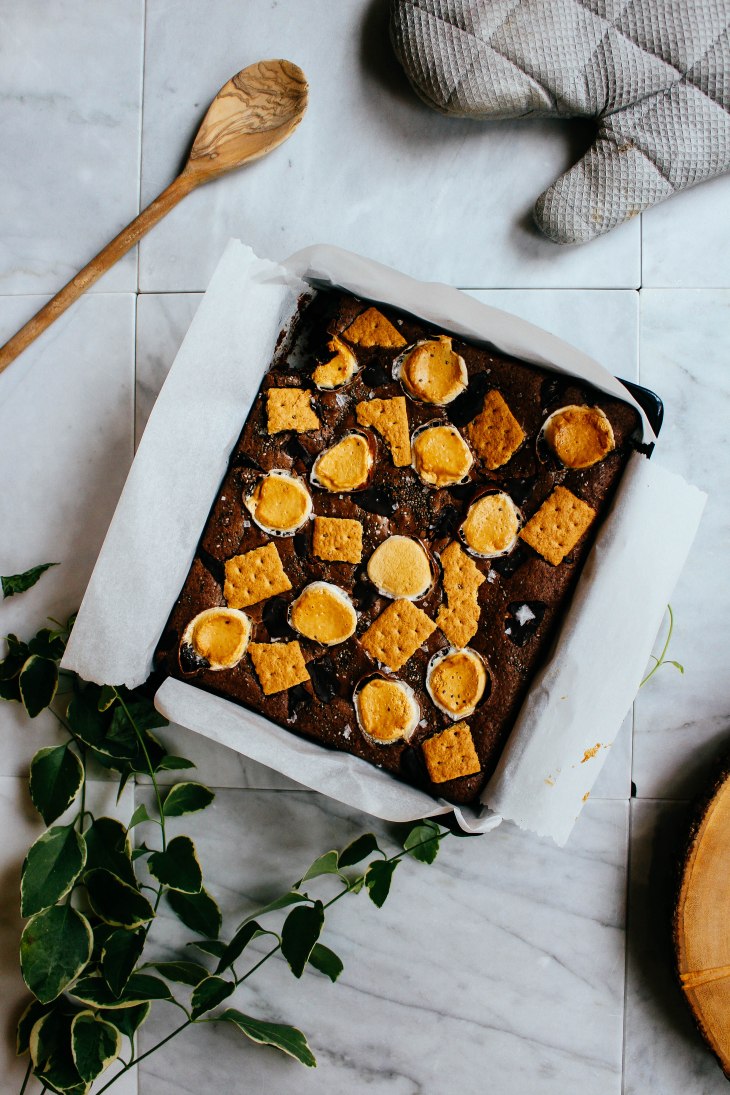 with a flash and bang, summer is gone. it wasn’t even a gradual transition, no gentle fade-out-of-summer-fade-into-fall. no. mother nature is unmerciful sometimes and i swear, once it struck midnight on september 1st, 2016, there was a distinct chill in the air again. a sharpness that only comes in autumn. clouded skies. early sunsets. emails in our inboxes about PSLs. (shut up starbucks im not ready yet).

i’ve mentioned it before, but i like to find meaning in everything. be it a chance event, interaction(s) with someone, a scene you see as you’re driving, a photo you’ve taken. making the insignificant significant. yes it can be dangerous, but it’s human nature. sometimes it’s out of necessity, sometimes it’s just for fun, and sometimes you’re just bored and it’s an exercise for the mind.

in this case… these brownies have a few meanings.

kidding about the last one. you guys know my sense of humour.

i saw this post on ladyandpups where she puts grated white cheddar on top of a sponge cake, and while i’m all for crazy combinations (peanut butter & fried egg sandwich with a dash of soy sauce is srsly AMAZING) sometimes i wonder if sometimes chefs randomly pairs two different ingredients, perhaps with a random generator, then proceeds to hipsterfy it through a myriad of different techniques, obscure sourcing of ingredients, abstract plating, coming up with a meaning behind it… and then SERVES IT TO US and we patrons are like YES MHM AHH THIS TASTES VERY GOOD HOW INNOVATIVE FIVE STARS FOR YOU. 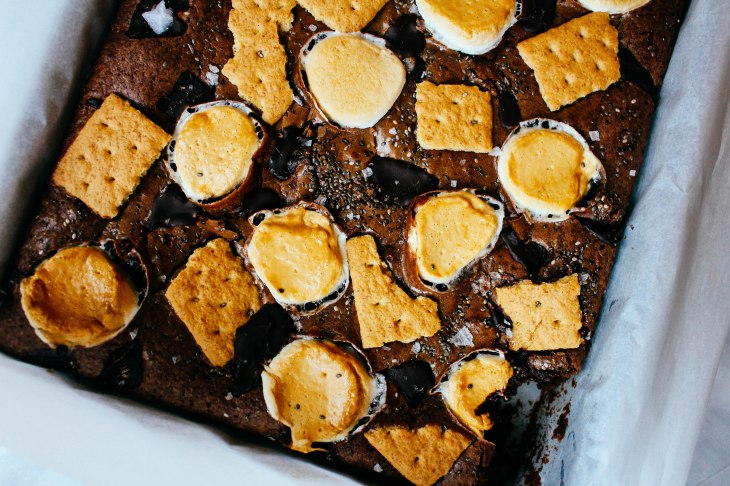 soooo, the response to these brownies were priceless. i got such a kick out of it (har, har). it ranged from “delightfully spicy” to “it adds something special” to “my stomach is still burning” to “why couldn’t you just make normal smores brownies”.

so yes i agree, it was just a tad on the spicier side. using spices in baking can be tricky, they can easily overwhelm all the other flavours. it should be well balanced, well rounded, complex, nothing jutting out.

adding onto that, most recipes online for smores brownies have an inordinate amount of marshmallows on top of a brownie layer, and while that makes for very impressive photos and i’m sure it tastes great…. wouldn’t it also be very sweet? and too too rich?

if there’s such a thing, that is.

i can only critique so much, as i am still a person who made smores brownies.

in this case i tried to make it a bit on the tamer side, dotting the top with halved marshmallows, broken graham crackers, and dark chocolate. flaked salt is key, because then you have almost all your tastes– sweet, bitter, spicy, salty. i’m not sure sour would be a welcome player in this case, although raspberries would be very pretty on top.

the actual brownie itself… was pretty darn good. thank you to cooks illustrated once again for being so reliable. the center pieces were definitively fudgey, while the edges were chewy. so you have the BEST OF BOTH WORLDS. so can recipes stahp arguing over how to make cakey brownies vs chewy brownies vs fudgey brownies because it’s possible to have the whole spectrum in one pan! call it magic… call it true. 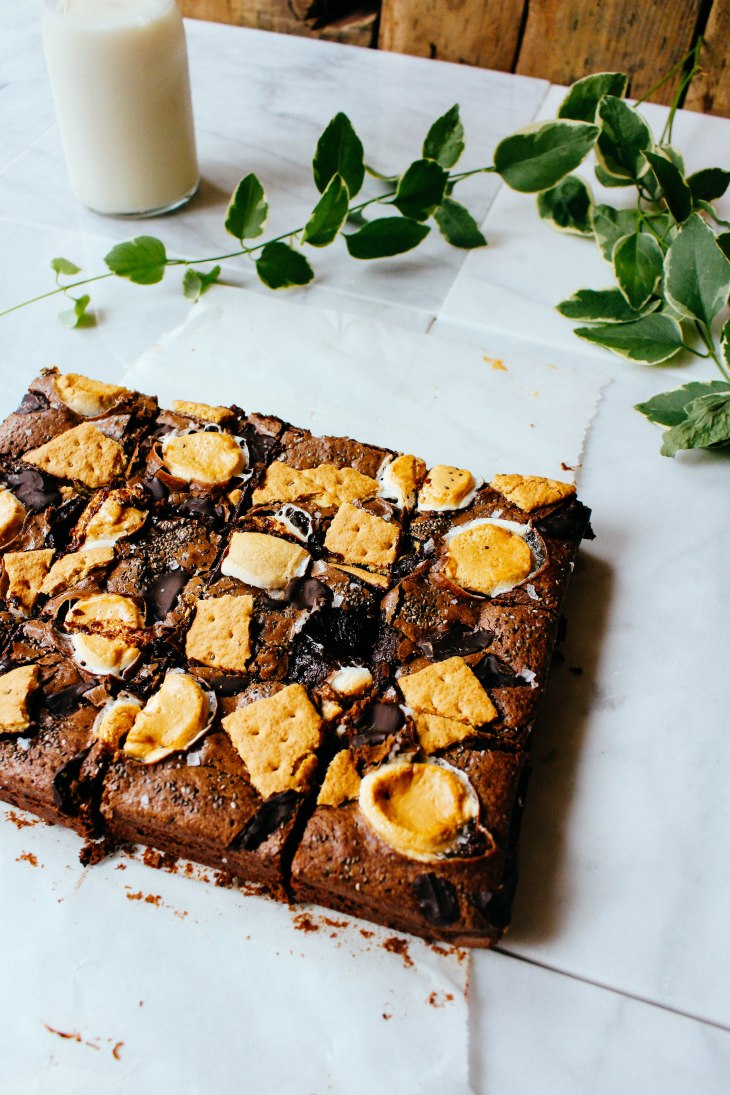 i’m just about done rambling but can i just say that the photo above is one of my favourites on this blog. it’s so geometric and MOUNTAINY.

i shied away from baking brownies partly because i thought they’d be hard to photograph. i mean. they’re just brown squares. lol. i even went on instagram to look at how others have styled it, and it’s mostly just stacking it on top of each other or cutting it into squares and laying it all out. yenno. what you’d expect.

so i’m going to peace out now… hope everyone has had a restful enough summer and a lovely labor day! 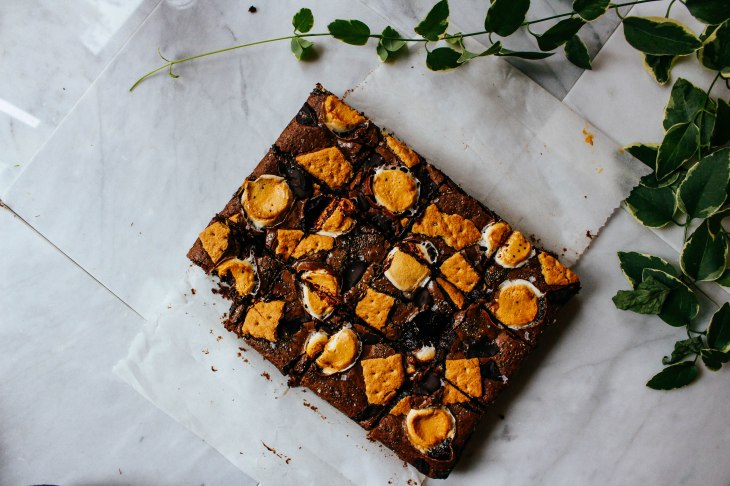