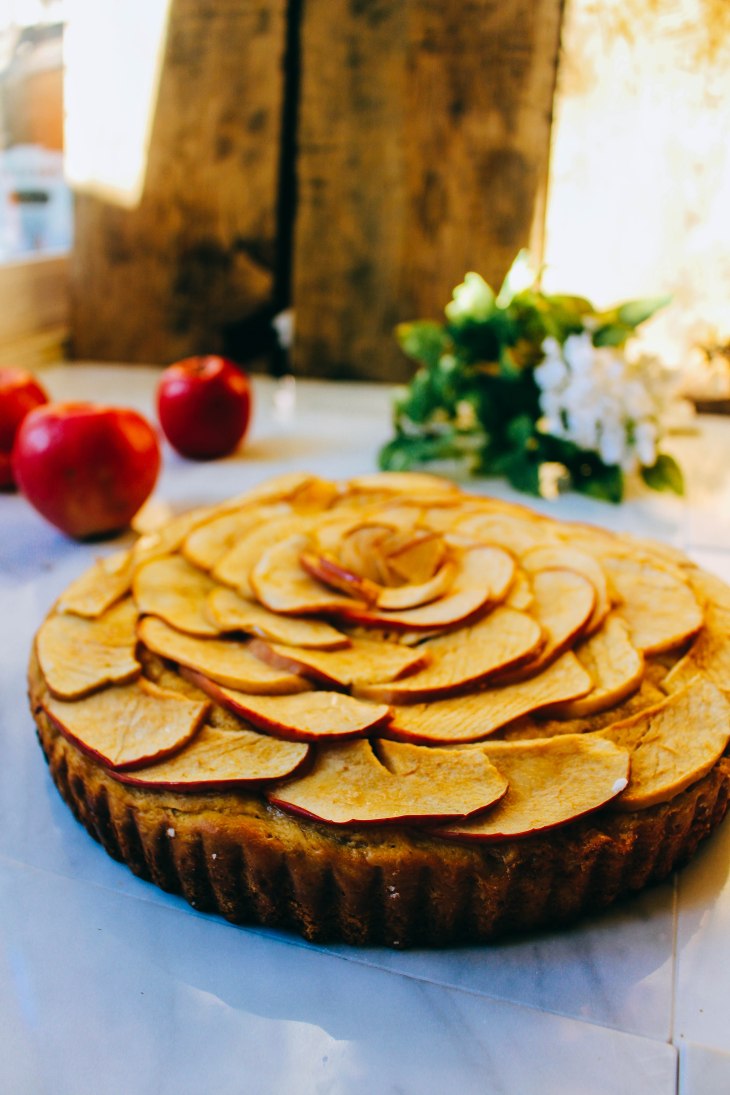 it is I, back with a recipe that is actually almost exactly the same as this one but transformed–

My intention was to make something crazy. I was thinking along the lines of… an apple oat crisp and a pumpkin cinnamon bun having a baby, only the baby would not only be cute but also elegant and posh and be able to stand on its own two feet at a high tea.

I’d say I got halfway there. You can’t tell from these photos but figuring out how to arrange the apple slices in an aesthetically pleasing way was actually such a dilemma. I felt very discombobulated, so I gave up and placed the slices around in a circle (how boring) but somehow it ended up looking like a rose (elegant!!). Then I couldn’t bear to cover that with an apple crisp topping around the edges, like I initially planned out in my head.

So no, I guess the apple oat crisp pumpkin cinnamon bun baby will have to be born another day.

Baking this bread, and these photos, will forever be associated with good memories. Why? It was a special, special day.

I had started the bread off, proofing my yeast. But it was 10 minutes until 10:00 am, which was when the COLDPLAY TICKET PRESALE opened up, and whenever it’s that kind of environment (think course registration) I end up not being able to do anything but sit around and twiddle my thumbs and click refresh. It’s the anticipation, okay. Let me have my fun.

END_OF_DOCUMENT_TOKEN_TO_BE_REPLACED

with a flash and bang, summer is gone. it wasn’t even a gradual transition, no gentle fade-out-of-summer-fade-into-fall. no. mother nature is unmerciful sometimes and i swear, once it struck midnight on september 1st, 2016, there was a distinct chill in the air again. a sharpness that only comes in autumn. clouded skies. early sunsets. emails in our inboxes about PSLs. (shut up starbucks im not ready yet).

i’ve mentioned it before, but i like to find meaning in everything. be it a chance event, interaction(s) with someone, a scene you see as you’re driving, a photo you’ve taken. making the insignificant significant. yes it can be dangerous, but it’s human nature. sometimes it’s out of necessity, sometimes it’s just for fun, and sometimes you’re just bored and it’s an exercise for the mind.

in this case… these brownies have a few meanings.

kidding about the last one. you guys know my sense of humour.

i saw this post on ladyandpups where she puts grated white cheddar on top of a sponge cake, and while i’m all for crazy combinations (peanut butter & fried egg sandwich with a dash of soy sauce is srsly AMAZING) sometimes i wonder if sometimes chefs randomly pairs two different ingredients, perhaps with a random generator, then proceeds to hipsterfy it through a myriad of different techniques, obscure sourcing of ingredients, abstract plating, coming up with a meaning behind it… and then SERVES IT TO US and we patrons are like YES MHM AHH THIS TASTES VERY GOOD HOW INNOVATIVE FIVE STARS FOR YOU.

END_OF_DOCUMENT_TOKEN_TO_BE_REPLACED 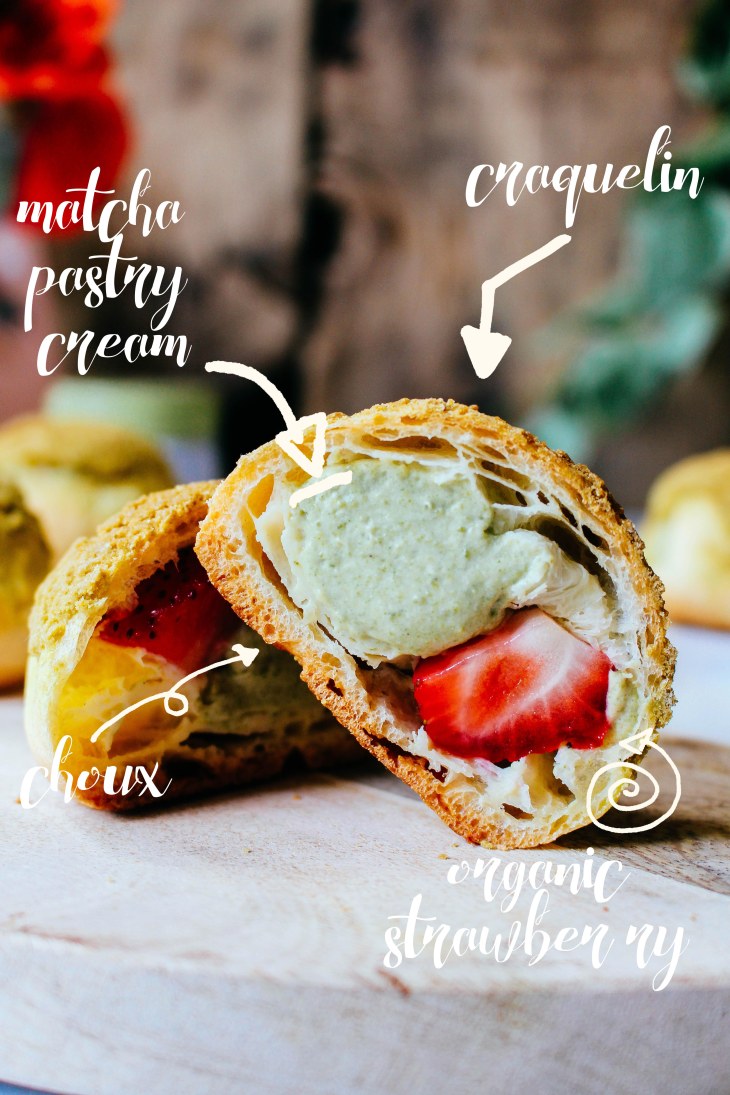 HELLO FOLKS of the internet. where has july gone?! the days all rolled into one and suddenly it’s august and we’re left with only. 3. weeks. left of summer. tragic.

the thought of matcha cream puffs was pinned in the back of my brain from one of those random videos that show up on your fb feed. and it’s one of those rare times that they’re actually relevant to you… like a short clip of nothing but a close-up of someone’s hands bursting open matcha cream puffs, shot in different angles, to show all its luscious glory.

so despite there being plenty of other things on my “to bake” list, such as brooks headley’s chocolate & eggplant dessert,  and many flavour combinations brainstormed: earl grey tea caramelized white chocolate, lavender & apricot, pistachio & raspberry– i somehow always fall back onto matcha.

END_OF_DOCUMENT_TOKEN_TO_BE_REPLACED

Every time I intend to make something out of my comfort zone / something crazy creative it ends up being quite normal– like these, haha. Then again if it’s too crazy creative it can blur into being gimmicky.  We’ll give it a week, I’ll think of something… actually, I finally got around to checking out Alice Medrich’s Flavor Flours and Dominique Ansel’s book, can’t wait to immerse myself in that.

So it’s reading break, and for me that means getting “life stuff” done. Stuff that I usually shove to a corner in my mind. Like my class 5 test, and uh mm yeah well uh hm I didn’t pass, haha. The examiner was the same lady who passed me for my N, and I was feeling relaxed/hopeful. A bit too relaxed, because about 20 minutes in I forgot to mind the speed limit (50km/h…. who actually drives that speed like pls) because we were about to go on the highway and I was thinking omg we’re going on the highway I haven’t failed yet!! which is the ultimate irony because that was the moment when I sped up to keep up with traffic and yeah it was game over at that point. Also in my defense it was downhill, ok.

END_OF_DOCUMENT_TOKEN_TO_BE_REPLACED

Every time I write a blog post I feel compelled to say “I’M BACK!!” as if I was on a long hiatus and that I really should’ve been blogging like every week. In an ideal world I’d be able to do it every day. I recovered from a horrid mystery stomach flu (or what I guessed it to be) last week, which left me feeling completely sucked out of energy, it was the weirdest feeling. Like I slept 9 hours the night before, and I passed out at 6pm for an hour, then I went to bed two hours after I woke up from that nap. Never in my life had I ever felt so energy drained, and it was pretty frightening to me thinking that for some people, maybe that is what their energy level is… and it won’t ever reach back to 100%…it just really made me appreciate my two legs and feeling back to normal.

Lately I’ve been trying to incorporate small things in my life to, I don’t know, improve my quality of living. Compounded habits, I think they call it? So it’s a bunch of small things like being more appreciative/practicing gratitude, being more active and exercising, being more creative and creating…  END_OF_DOCUMENT_TOKEN_TO_BE_REPLACED